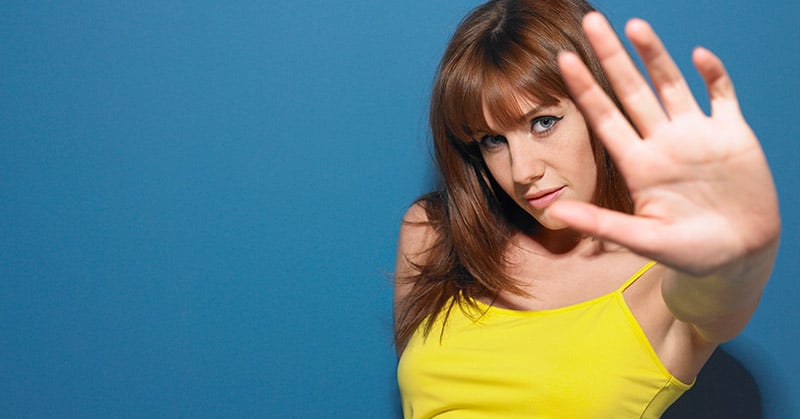 Financial freedom is something that everyone wants. However, very few people are able to reach financial independence and retire early.

Most of us are conditioned to believe that we have no choice except to work until we’re 65-70 years old. We have plenty of excuses for why financial independence is not possible or why it will not work for us.

If you want to achieve financial freedom, you’ll need to overcome the common money excuses that hold many people back. Let’s take a look at some of the most common excuses.

Most people assume that financial independence and early retirement are only possible for people with huge salaries. While it’s true that making more money can help, having a big salary is not a requirement.

Also, keep in mind that it’s possible to increase your income. Don’t use your current income as an excuse. Focus on the things that you can do to increase that income. Possibilities include:

Looking at my own life, a major turning point in my finances occurred when I started my own business and began to increase my income.

If you are burdened with a lot of debt (like student loans, credit cards, and other personal loans), financial independence may seem impossible. Many Americans are conditioned to feel that consumer debt is just a part of life, and very difficult to eliminate.

Of course, paying off a large amount of debt will require plenty of discipline and commitment, but eliminating debt and avoiding future debt is possible.

If you browse personal finance blogs for any length of time, you’re sure to come across many inspiring debt payoff stories. If you’re currently struggling with debt, I’d suggest reading some of these stories because they can provide a great deal of motivation, and you’ll see other people who have overcome the same challenges that you’re facing. A great place to start is my interview with Ashley, who paid off $45,000 of debt in 17 months.

One of the reasons why most people struggle with debt payoff is because they have no real plan or strategy. I highly recommend using the debt snowball or debt avalanche approach to give yourself a much better chance of success. You can read Debt Snowball vs. Debt Avalanche to learn the details of both and to determine which is best for you.

Many of us know that we should be saving more, but it seems like there is always something pressing that takes priority. It’s common to make excuses and think that as soon as I get past a challenge, I’ll be able to start saving.

The problem is, there will always be something that makes saving difficult. No time is perfect.

Although there are some legitimate reasons why you may not be able to save as much as you’d like at a particular time, try to avoid the trap of always thinking that the timing will be better in the future. Instead, take action now to put yourself in a better position.

If you’re not sure where to start, follow the 9 Steps to Financial Independence.

4. I Don’t Know Anything About Investing

Investing seems like a confusing topic for most people who don’t have experience with it, and unfortunately, that often leads people to simply avoid it.

The truth is, you don’t need to be an investing expert in order to manage your finances and pursue financial independence. There are plenty of great investing books, not to mention personal finance blogs that offer lots of free information, so getting a basic level of investing knowledge is not hard at all.

Investing doesn’t need to be complicated. In fact, it can be quite simple. For example, a three-fund portfolio is very simple and is the foundation for many people who are pursuing financial independence.

If you’re not sure where to start and you feel like you don’t have enough money to invest, see 9 Ways to Start Investing Without a Lot of Money.

5. I Don’t Want to Live Like a Pauper Just to Save Money for the Future

There are many different paths to financial independence, and although you’ll need some financial discipline, you don’t need to take it to the extreme.

Personally, I believe that increasing income has bigger potential than saving more money. You can only cut back so much until you run out of ways to save more, but you can always make more money.

6. Financial Independence is Only for People with No Kids

Having kids can be expensive. There is no doubt that it’s easier to achieve financial independence without kids, but that doesn’t mean that people with kids cannot do it too. There are plenty of people who have kids that have been able to achieve their goals of early retirement. Don’t use kids as an excuse.

7. I Didn’t Start Saving Early Enough, so What’s the Point?

If you start your pursuit of financial freedom at an early age, of course, you’ll be in a better position to reach your goals. But you can’t change the past. If you’re older and you feel like you’ve missed out on the opportunity, the best thing you can do is take action now. The longer you wait to take control of your finances and save for retirement, the harder it will be.

If you’d like to reach financial freedom (and of course you would), be sure that you are not being held back by these excuses. You can start your journey by reading my article 9 Steps to Financial Independence, which lays out a simple and practical approach. 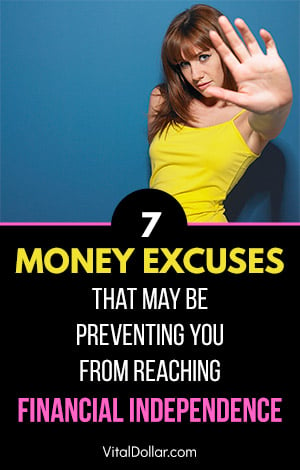 The post 7 Money Excuses That May Be Preventing You from Reaching Financial Independence appeared first on Vital Dollar.