Politics can be a hot button topic in America. With rising tensions on both sides of the political spectrum, some claim that bipartisanship is dead. Recent research shows that may well be true.

Today’s charts come from a report by the independent think tank Pew Research on the partisan divide between the two major U.S. political parties, Democrats and Republicans.

The data is based on surveys of over 5,000 adults to gauge public sentiment, tracking the dramatic shifts in political polarization in the U.S. from 1994 to 2017. The results are a fascinating deep dive into America’s shifting political sentiment.

Over Two Decades of Differences

The animation above demonstrates how the political divide by party has grown significantly and consistently over 23 years. In 1994, the general public was more mixed in their allegiances, but a significant divergence started to occur from 2011 onward.

By 2017, the divide had significantly shifted towards the two extremes of the consistently liberal/conservative scale. Median Democrat and Republican sentiment also moved further apart, especially for politically engaged Americans.

How have Americans’ feelings across major issues evolved over time?

NOTE: For brevity, any mention of Democrats and Republicans in the post below will also refer to survey respondents who “lean Democratic/ lean Republican”.

Americans on the Economy 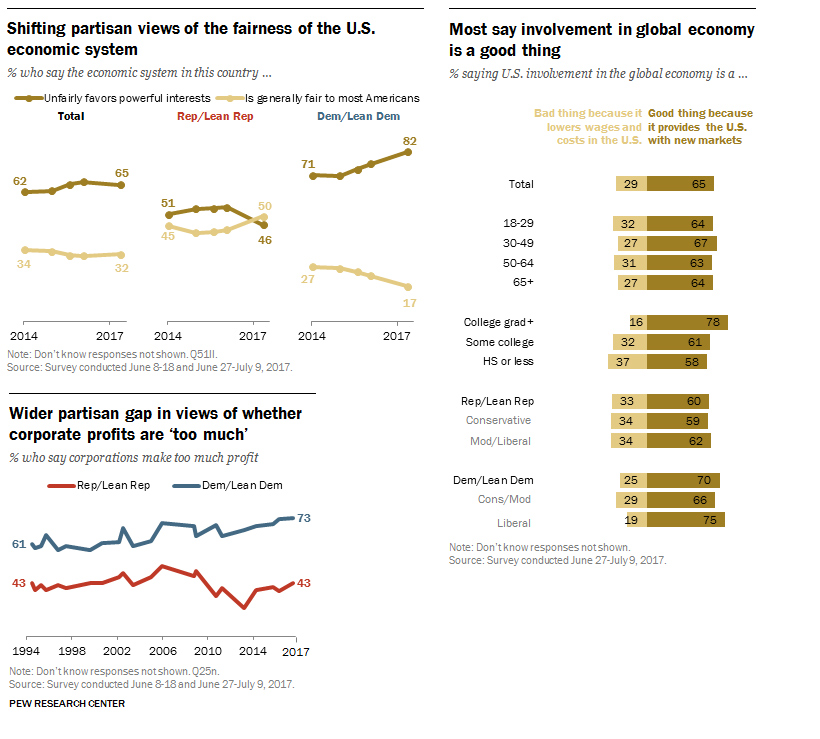 Several survey questions were designed to assess Americans’ perceptions of the economy. Surprisingly, between 60–70% of Democrats and Republicans agree that U.S. involvement in the global economy is positive, because it provides the country with access to new markets.

However, they diverge when asked about the fairness of the economic system itself. 50% of Republicans think it is fair to most Americans, but 82% of Democrats think it unfairly favors powerful interests.

Finally, 73% of Democrats think corporations make ‘too much’ profit, while only 43% of Republicans think so. Since 1994, Democrats have become more convinced of this point, gaining 10 percentage points (p.p.), while Republican impressions have fluctuated marginally.

Americans on the Environment When it comes to climate change, both Democrats and Republicans see that there is growing evidence for global warming, but they are not sold on the reasons why. 78% of Democrats see human activity as the cause, while only 24% of Republicans agree.

Americans also disagree on whether stricter sustainability laws are worth the cost—77% of Democrats think so, but only 36% of Republicans are on the same page. The position of Democrats on this issue has increased by 11 p.p. since 1994, but dropped by double (22 p.p.) for Republicans during this time.

Americans on the Government Americans are highly concerned about the U.S. presence on the global stage. Over half (56%) of Democrats think the U.S. should be active in world affairs, while 54% of Republicans think such attention should be focused inward instead of overseas.

This filters into what they consider the best strategy for peace—83% of Democrats believe in democracy to achieve this, while only 33% of Republicans agree, preferring military strength instead. Democrats have cemented their position on diplomacy by 17 p.p. since 1994, growing the political divide.

Americans on Their Society 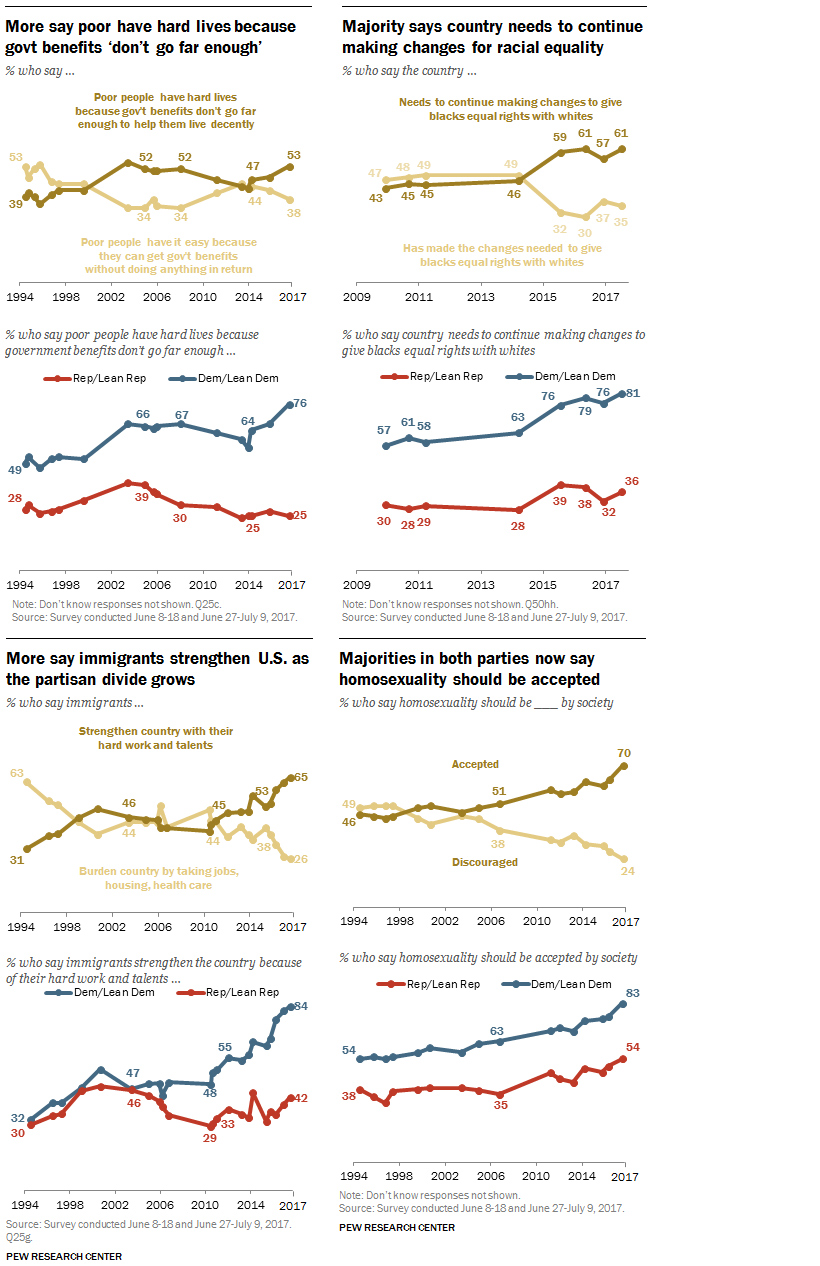 On several social issues, both parties have become more liberal in their opinions over the decades, especially on immigration and homosexuality. Democrats have seen the biggest advancement on their views of immigration, from 32% in favor in 1994, to 84% in 2017.

Americans on Each Other 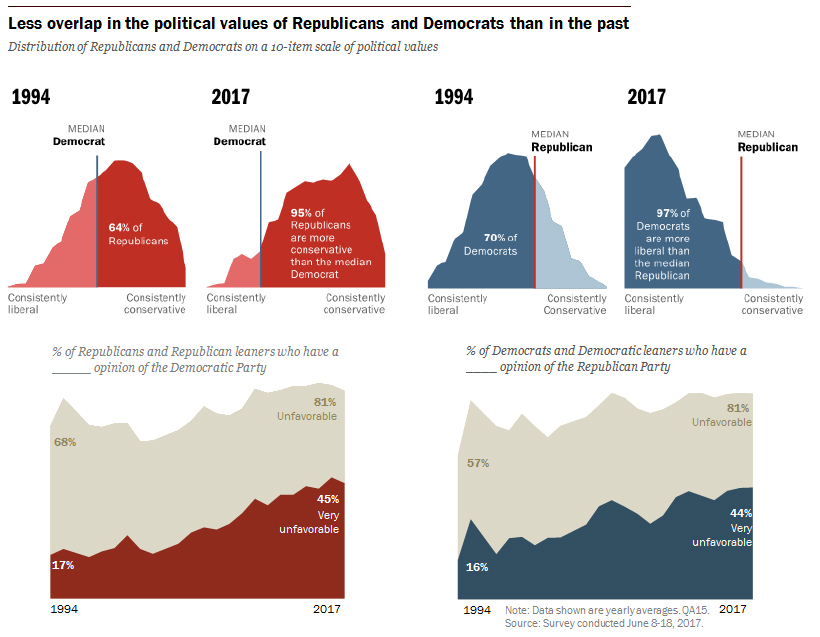 It’s evident that not only does the American public hold less of a mix of liberal and conservative values, but the center of this political divide has also moved dramatically on both ends of the spectrum. In simple terms, it means that Americans are less willing to consider the other side of debates, preferring to stay entrenched in the group think of their political affiliation.

Not only this, but partisan animosity is on the rise—81% of Republicans and Democrats find those belonging to the other party equally unfavorable. In fact, both parties have seen a 28 p.p. increase in ‘very unfavorable’ views of people in the other party, compared to 1994.

Can the Rift be Repaired?

While the above data on group polarization ends in 2017, it’s clear that the repercussions continue to have ripple effects into today and the future. These differences mean there is no consensus on the nation’s key priorities.

In 2019, Republicans believe that terrorism, the economy, social security, immigration, and the military should be top of mind, while Democrats refer to healthcare, education, environment, Medicare, and the poor and needy as their leads.

With Trump’s presidential term up for contest in 2020, the lack of common ground on pressing issues will continue to cause a stir among both Democratic and Republican bases. Is there anything Americans will be willing to cross the aisle for?